Women in countries across the Middle East are getting wealthier. At the current rate of growth, Boston Consulting Group (BCG) reports that women’s wealth in the region could surpass the $1 trillion mark by 2023.

BCG’s figures for the Middle East reflect overall growth in the share of women’s wealth across the globe, as markets and employers continue their journey towards an equitable global economy. Women currently account for just over 32% of the world’s assets under management, while this figure is expected to surpass 34% by 2023.

In the Middle East, women manage nearly $800 billion in assets, amounting to 13% of the region’s total wealth of approximately $6 trillion. While the male share of these assets remains well above $5 trillion, women’s wealth is expected to grow at a compound annual growth rate (CAGR) of nearly 9% over the next three years taking the figure past $1 trillion.

Saudi Arabia is driving growth in the region, with assets under women’s management valued at nearly $225 billion. UAE is the second market, with women’s wealth of just over $100 billion, although it is expected to catch up with Saudi Arabia over the next few years on the back of a CAGR of more than 8% compared to Saudi Arabia’s 5%.

As women’s wealth grows in these major markets and in other countries across the region, the Middle East’s predicted CAGR is higher than that of North America and Western Europe. Asia, Latin America and Eastern Europe are growing marginally faster, although drivers of growth differ for different regions.

In the Middle East, Boston Consulting Group paints a promising picture of growth, noting increased access to healthcare and education for women in the region. Female participation is also drawing level with male figures in the primary and secondary education sectors. In tertiary education, there are now more women than men in universities across 15 of the 22 Arab countries. 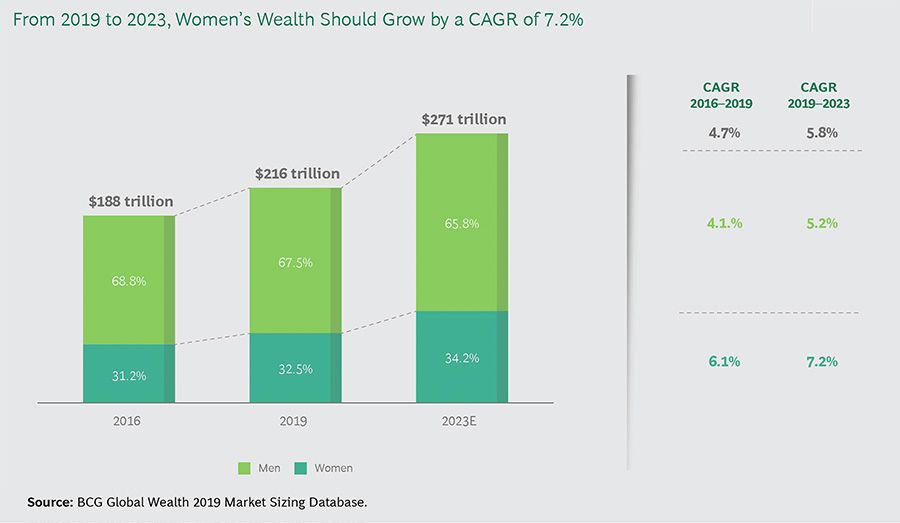 A similarly promising outlook is unfolding beyond the education sector. Female leadership is increasing across the region, with the UAE witnessing a 2% and higher growth in the number of women leaders. In Saudi Arabia, BCG reports that female participation in entrepreneurship is growing, while the female share of the workforce is also increasing.

Entrepreneurship is vibrant and rapidly expanding economic segment in the region as a whole, which gives female participants in this landscape a strong position. Labour force participation and women in leadership positions follow respectively as drivers of women’s wealth in the Middle East. 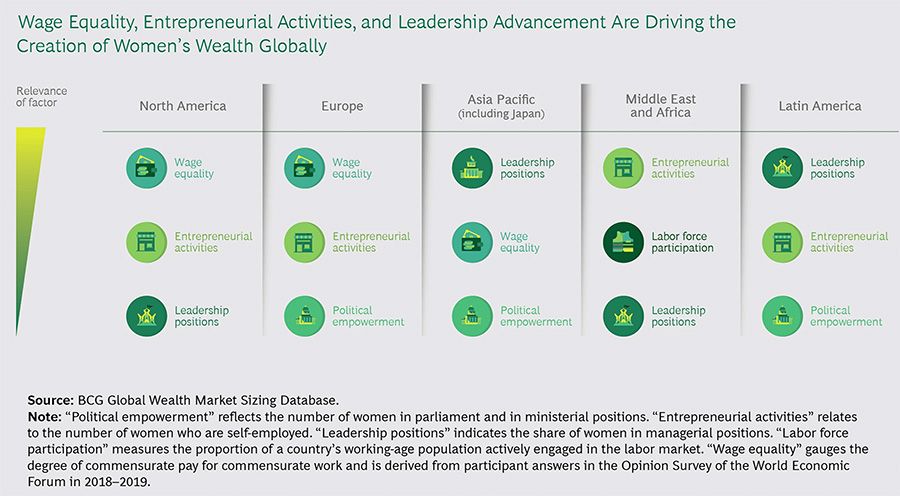 As these promising trends unfold against the backdrop of increased political stability in the region, BCG Middle East Managing Director Mustafa Bosca predicts that growth will remain strong in the future.

“The opening up of the Middle East is further evidence that expanded access to education and health care can have positive implications for women. Labour force participation, leadership positions, entrepreneurial activities, and economic empowerment all play important roles in economic advancement, which will, in turn, contribute to further growth in women’s wealth over the next decade,” said Bosca.

BCG has been monitoring female participation and leadership in the region on a regular basis. The firm uses the latest figures to argue for more versatile investment advisory and wealth management services in the region. BCG advocates advisory firms to shift away from their traditional notion of a female investor, and tailor their advice to specific individuals, enabling them to capitalise on a rapidly expanding market.

“A new wealth management model will meet the demands of women and empower them to make their own decisions. By doing so, they will continue to become a more prominent economic force to the point where, half-way through the coming decade, gender equality will no longer be discussed,” explained Bosca.

Saudi women rising up in industry